There are places in the world that you want to visit ‘one day, maybe’, that you have no intention of going to at the very moment and then all of a sudden it turns out that the tickets are bought, visa is issued, backpack is packed, and a whole company of friends is traveling with you. This is exactly how I happened to be in Australia.

But before taking pictures with kangaroos and rubbing koalas’ backs, we actually had to get to the place. Sydney is about 15,000 km away from St. Petersburg, which means you have to spend more than 20h in the air. I am normally okay with flying but two 9-hour flights in a row was probably a little too much. I mean, when you get from Moscow to Singapore, you are like, ‘Okay, that was not too bad’, but then you have to get on a plane again and fly over the whole South East Asia, cross the ocean AND most of Australia. By the time you get there you are tired, tremendously jet lagged, and probably weigh 5 kilos more than when you embarked the plane in Moscow because sleeping and eating is the flight mode for those whole 20h in the air. I wonder what it takes to get to New Zealand then?..

The population of Australia is about 27 million people, and most of them live in one state – New South Wales, Sydney being its capital. Having been founded by British settlers in 1788, Sydney now is a blend of many different cultures. We were staying in a small two-storeyed house downtown; originally this used to be a workers’ district where people with limited income would reside. However, over time the place turned into a hip spot with houses and apartments costing several hundred thousand dollars, with a myriad of cosy cafes and bars around.

Sydney is charming: trying to seem busy and always on-the-move, it still bears the tranquility and relaxation that the whole Australia radiates. To me the city seemed like a peculiar mixture of America and Great Britain, with skyscrapers hiding behind Anglican-style churches and people driving on the left-hand side.

It’s interesting how Sydney didn’t use to have its own city symbol, like the Statue of Liberty in New York or the Eiffel Tower in Paris, so they decided to make their own. That is how the Sydney Opera house was constructed in 1973, and it is definitely one of the main attraction points in the city now. They even have a Pandora charm in the form of the Sydney Opera! 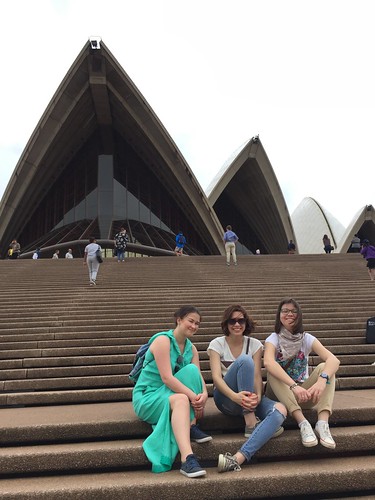 The only downer here was the weather: it was raining cats and dogs the whole time we were in Sydney, so we missed on some of the attractions, covering this up with bars and restaurants.

Our next destination was a house in the Blue Mountains that we rented from Mark on Airbnb, and it was quite an adventure on its own. Mark, our host, discovered a cave close to his house some 30 years ago, excavated it all by himself and set up a nice nesting place in it, with a fire, chairs, full barbecue equipment and two guitars to accompany a fancy dinner. While excavating the cave, Mark even found some tools belonging to the Aboriginals, and in order to preserve them he – guess what? – buried them back into the ground. A funny bloke, Mark is. Well, what would you expect from a person who has a kangaroo with a baby living in his backyard? 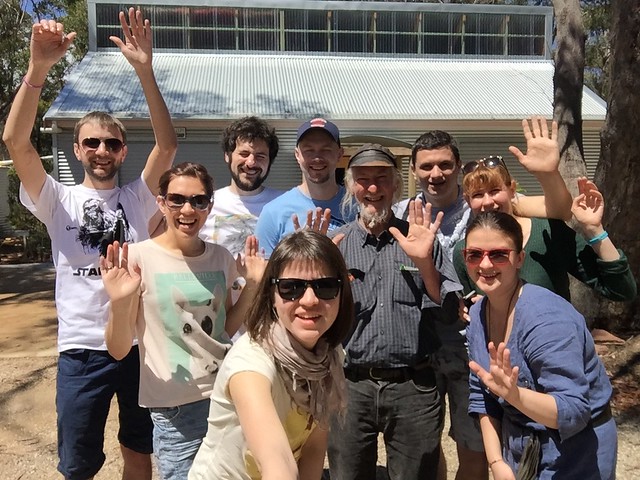 We spent an amazing time in the cave, lighting the fire, playing the guitar, laughing and talking deep into midnight. We lit the candles and placed them over the whole cave, so that it resembled a starry sky. We were singing some long-forgotten songs that one can only sing after at least three whiskeys. We even made up our own song about Australia! Truly a night to remember.

Since we were traveling with a group of friends (8 people in total), we decided to do something that we normally don’t do, like renting a hippie van and hitting the road! Originally this was the plan, and we were supposed to drive this little boy to Mark’s place in the Blue Mountains: 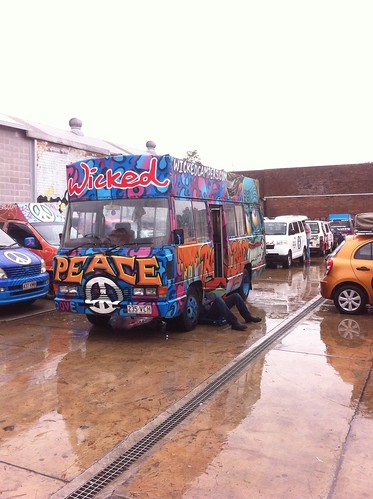 Unfortunately, as you can tell from those two legs sticking from underneath, it didn’t quite work out: it refused to operate, so we had to rent another car. It turned out that our driver’s licenses do not quite work in Australia, so we had to go to a translation’s office to get them translated into English (they wouldn’t believe our fuzzy ID’s were actually driver’s licenses). Only then were we allowed to rent a vehicle and run wild into Australia’s endless expanses. So if you ever decide to rent a car on the continent, make sure you have an international driver’s ID with you!

Let’s face it: nature is THE thing to see in Australia, and this is probably what most people go there for. We rented a car in Sydney and drove it all the way to Melbourne. During that time we saw flocks of kangaroos (or should I call it a herd instead?..), koalas hanging from the trees, echidnas, amusing birds of all colours, alpacas… you name it. In this country the nature surrounds you, whether you like it or not (and sometimes it is the second option, indeed). 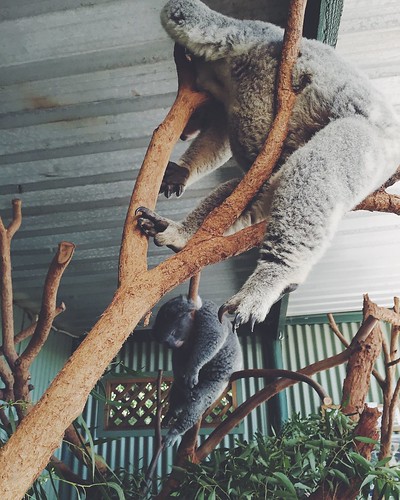 For me one of the highlights of the whole trip was the Great Ocean road. It spans for 243 km along Australia’s south-east coast and keeps you breathless for the most part. It was built between 1919 and 1932 by returned soldiers and is the world’s largest war memorial. What a beautiful way to perpetuate one’s life and name!

The surf coast between Torquay and Port Campbell makes you wish you learned your surfing lessons well. Lofty cliffs go down sheer into the blue ocean, with azure waves crashing against them, and a handful of surfers trying their luck on the wave’s crest. It’s hard to call us sportspeople, so we were just ‘trying’ to swim (the waves made it almost impossible though). But lack of sporting experience could not of course prevent us from enjoying the picturesque views. If you were saving the word ‘jaw-dropping’, this would be the time to use it.

Australians are charming: with all those “no worries” and “mates” they make you fall in love with them immediately. Living on a land so far away from the rest of the world and enjoying the great weather almost all year round, no wonder they are so laid back and relaxed. They can have a kangaroo steak for lunch and then go surfing at the end of the working day. They can wear swim shorts or a diving suit around town and feel at ease. Sometimes they speak with a funny accent that you understand like 30% of but they are still as friendly as it can be, even if you are asking them for a fifth time to repeat what they just said. Just make sure to smile back. No worries, mate.

When I look back now, I do think that we had a great trip, mostly due to the fact that we were so many, and it was so much fun being there with friends. I could not say that if I had gone there alone or with my husband like we normally do, I would have enjoyed the trip just as much. Australia needs to be shared with a company, noisy, beer-drinking, song-singing and as lively as it gets.