The year 2020 hasn’t been treating us kindly. By the time we made it to summer, we lived through Australian wildfires, massive protests against racism, and a world pandemic. The closed borders are currently keeping all the travelers including myself at home. Uh oh, and also the fact that right in the middle of the coronavirus outbreak, I gave birth to a baby girl👧

Since there are no new adventures in store, now is the perfect time to dig out some old memories like our trip to Gdansk last summer. And it was one special trip, too!

Before Gdansk, I had visited Poland on several occasions but it was my first time on the Polish Baltic sea. The occasion was extraordinary: my best friend was getting married. Her fiance has relatives in Gdansk, and having a wedding there turned out to be much more convenient (and cheaper) than in England where they live.

And so we flew to Gdansk with a stopover in Helsinki. Funny enough, I met a friend of mine at the airport in Helsinki. It’s so strange now to think that we could all travel freely back then.

Gdansk is located on the Baltic sea. Together with Gdynia and Sopot, they form the so-called “Tricity”: a metropolitan area consisting of three cities adjacent to each other.

Fun fact: you might recognize Gdansk from the series “the Witcher”. Supposedly, Novigrad was partially inspired by the Gdansk architecture, by the 15th century Gdansk Crane in particular. The crane was the largest of its kind in Europe and can lift loads of up to 2,000 kg! 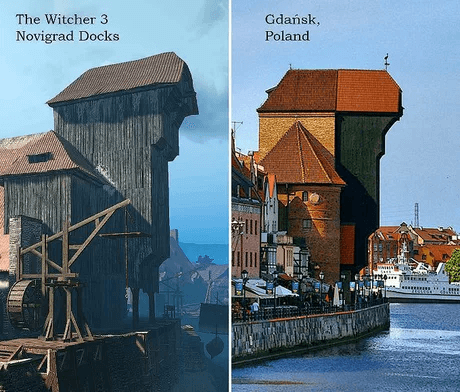 A bit of history

Gdansk was founded more than a thousand years ago, back in the 10th century. In 1308, Teutonic Knights seized it from Poland. Later, in 1361 the city joined the Hanseatic League and became one of the richest ports in the Baltic.

In 1793 it was incorporated into Prussia, and after WWI became the autonomous Free City of Danzig. This is also where WWII began, when the Nazis attacked the Polish troops stationed at Westerplatte. The city suffered immensely during the Second World War, with the city center almost entirely destroyed – and luckily, rebuilt afterwards. 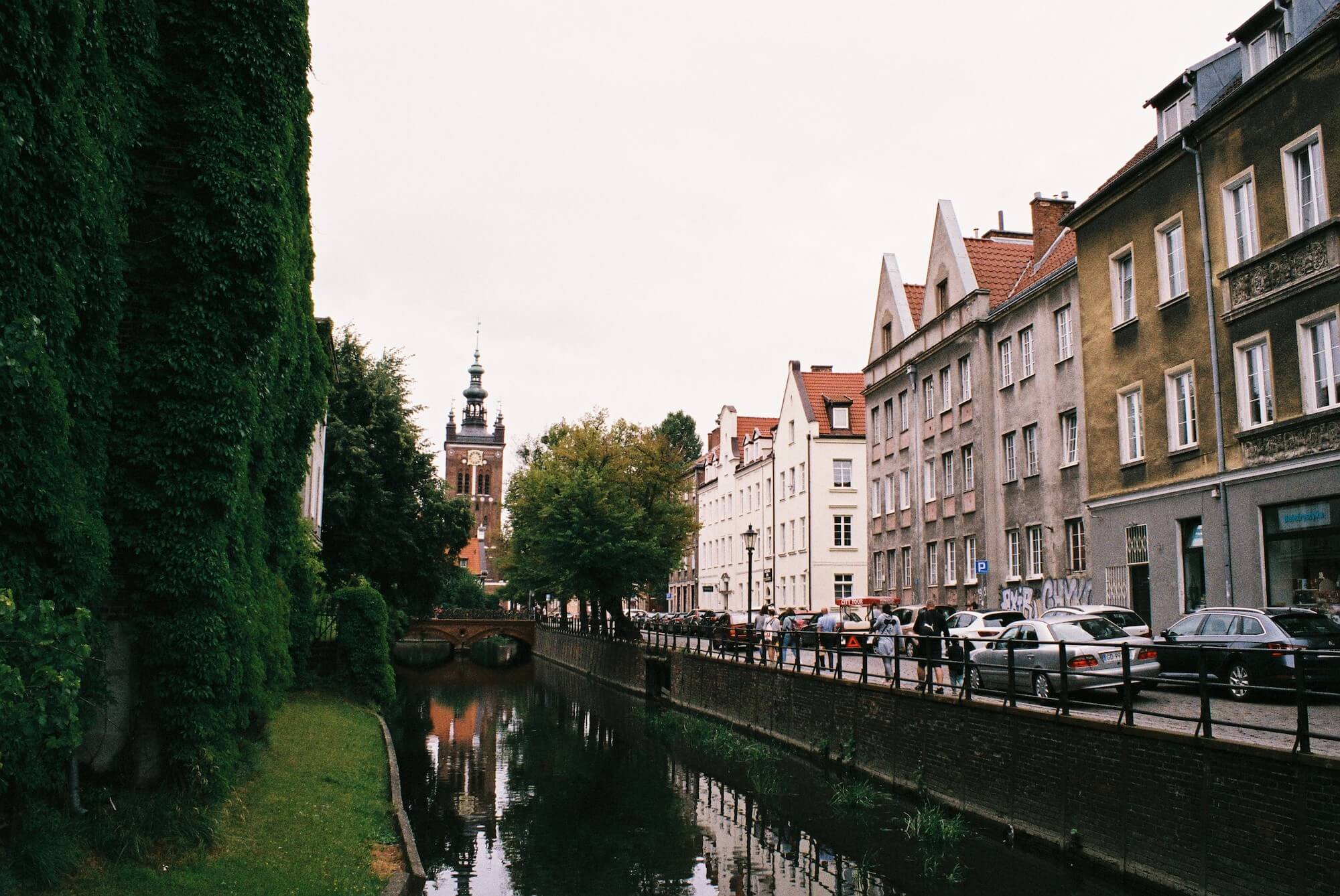 Today, Gdansk is a lovely and vibrant town to spend a long weekend and explore the Polish Baltic shore.

Things to see and do

With the population of around 470 thousand people, Gdansk is Poland’s principal seaport. One can tell the life here is thriving: a bustling city center with lots of tourists, summer cafes, and attractions. I would recommend spending at least a couple of days here, to explore the city and its surroundings in a laid-back mode. 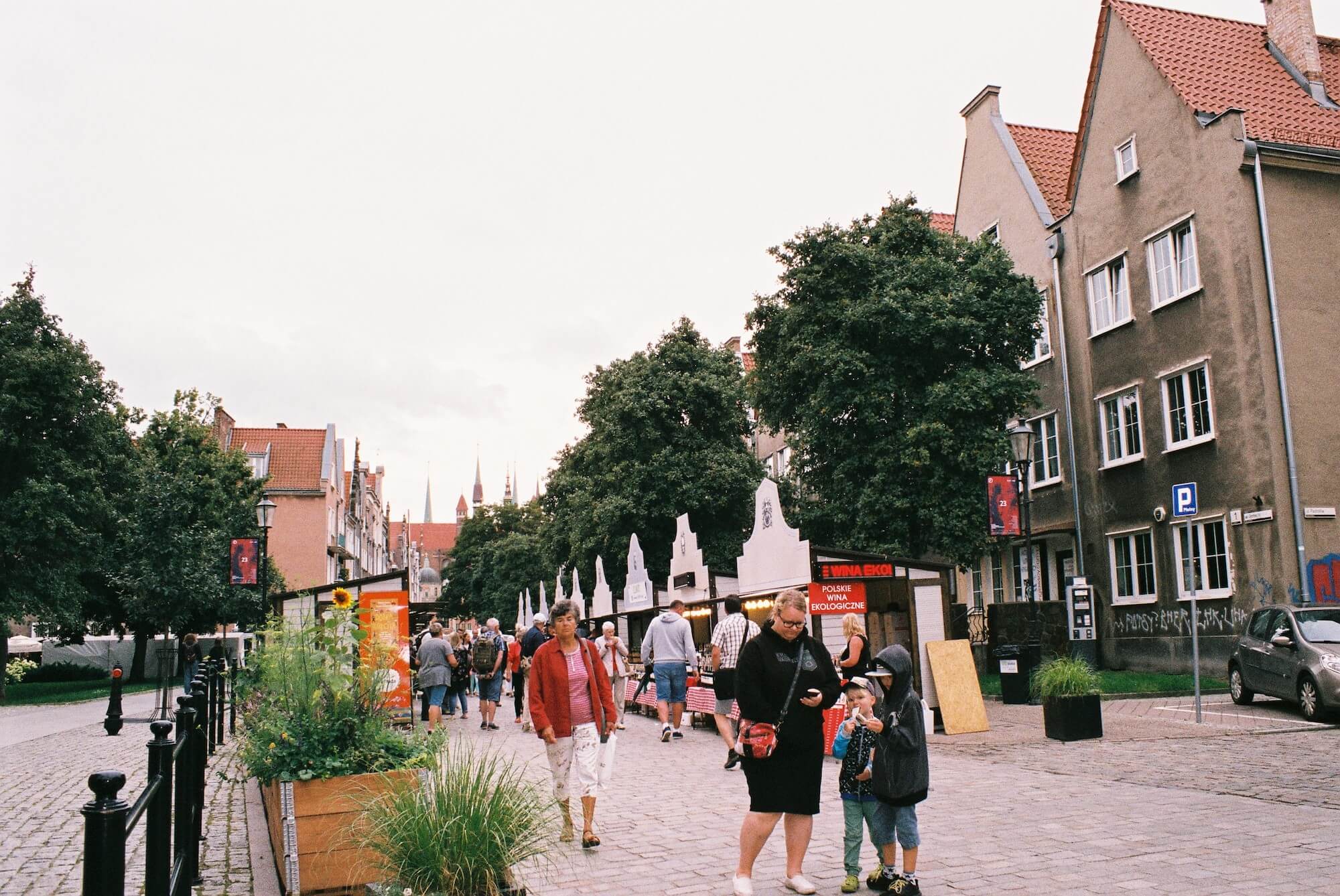 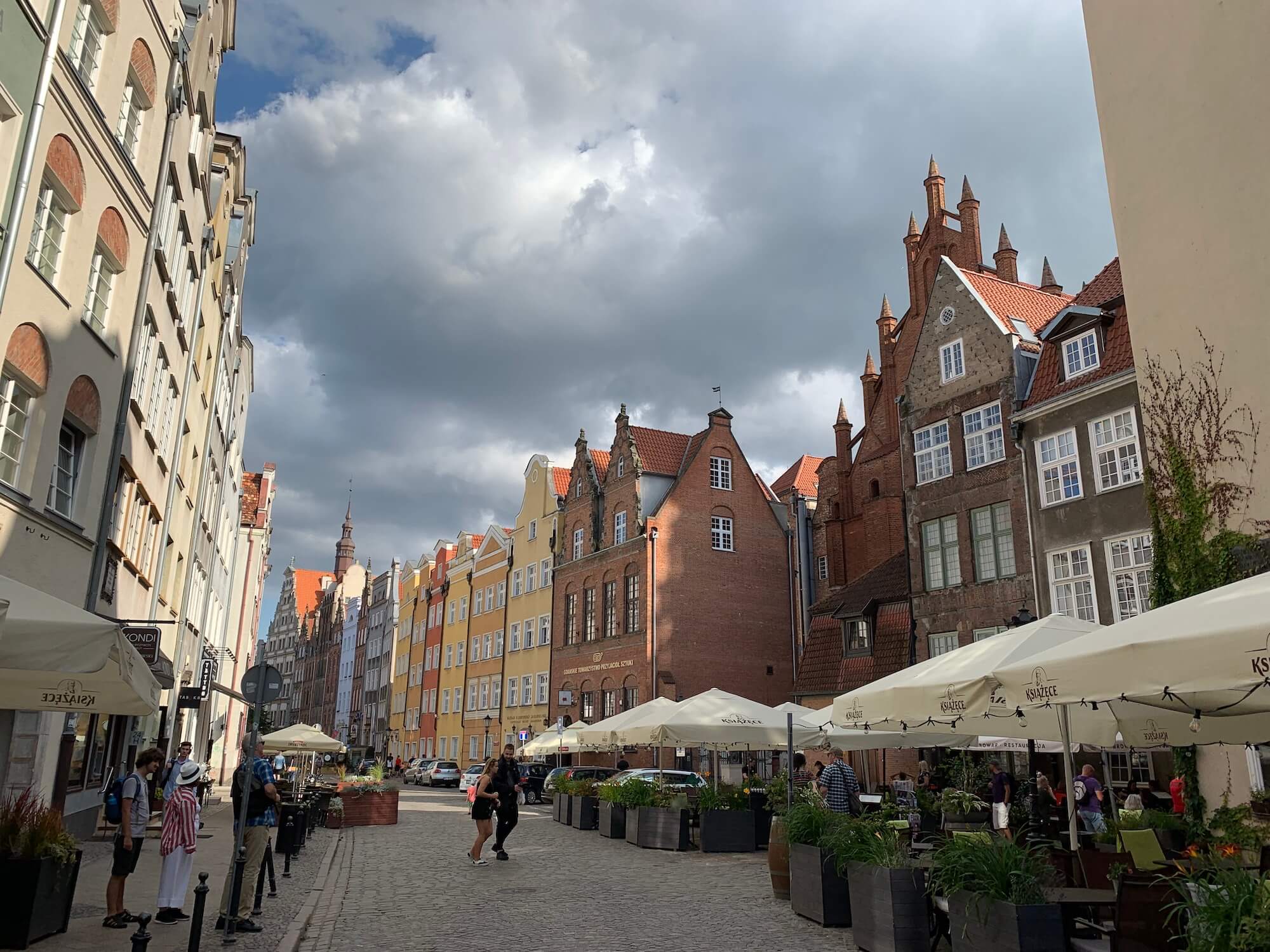 Mariacka street is full of amber shops and burgher houses. This is where we were staying, and I can recommend the place. Although we had the street-facing apartment, it was rather quiet, with the only exception of some street musicians. 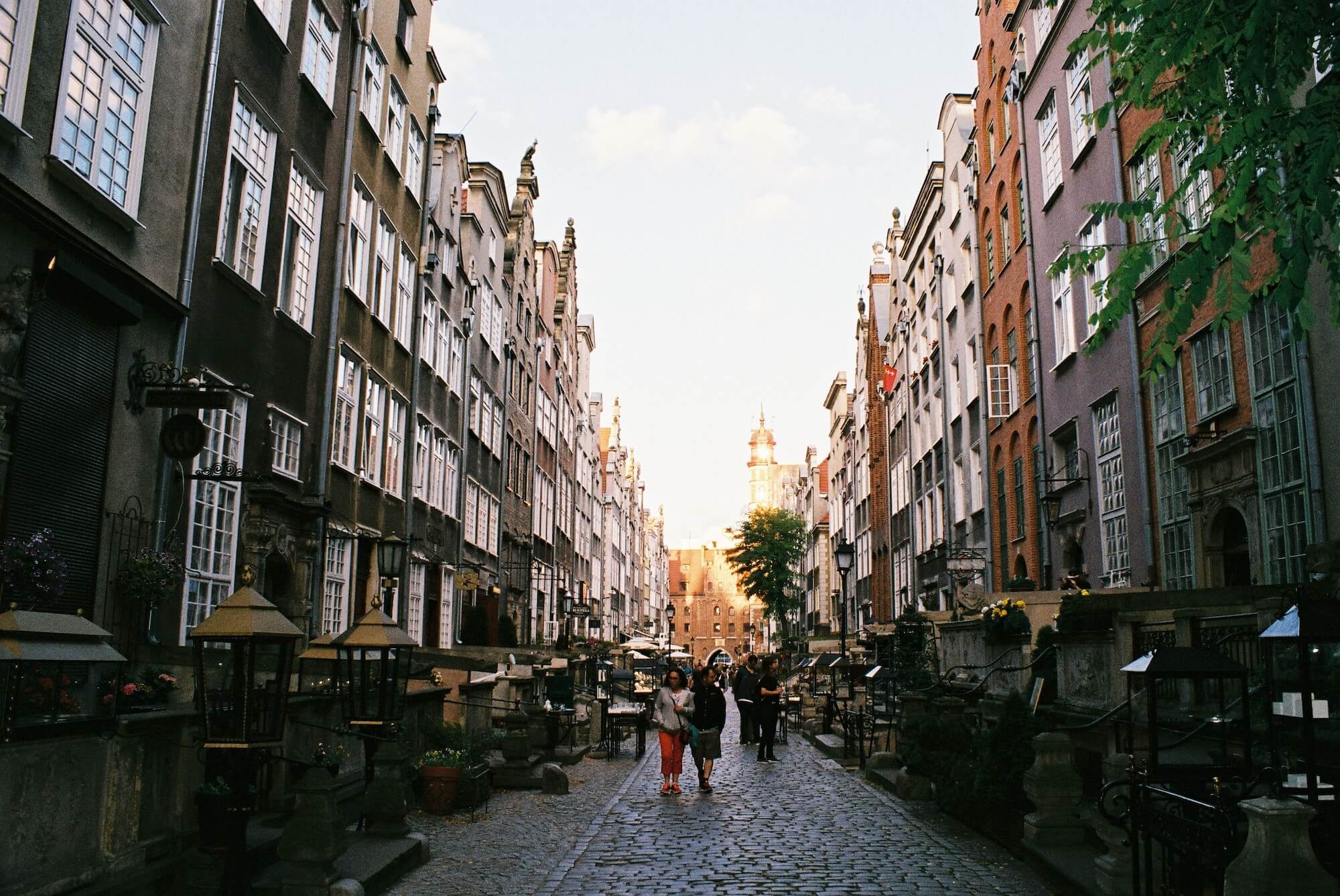 Walk along the Stara Motlawa embankment to enjoy the river city views with some nice cafes – and the famous Crane, of course. 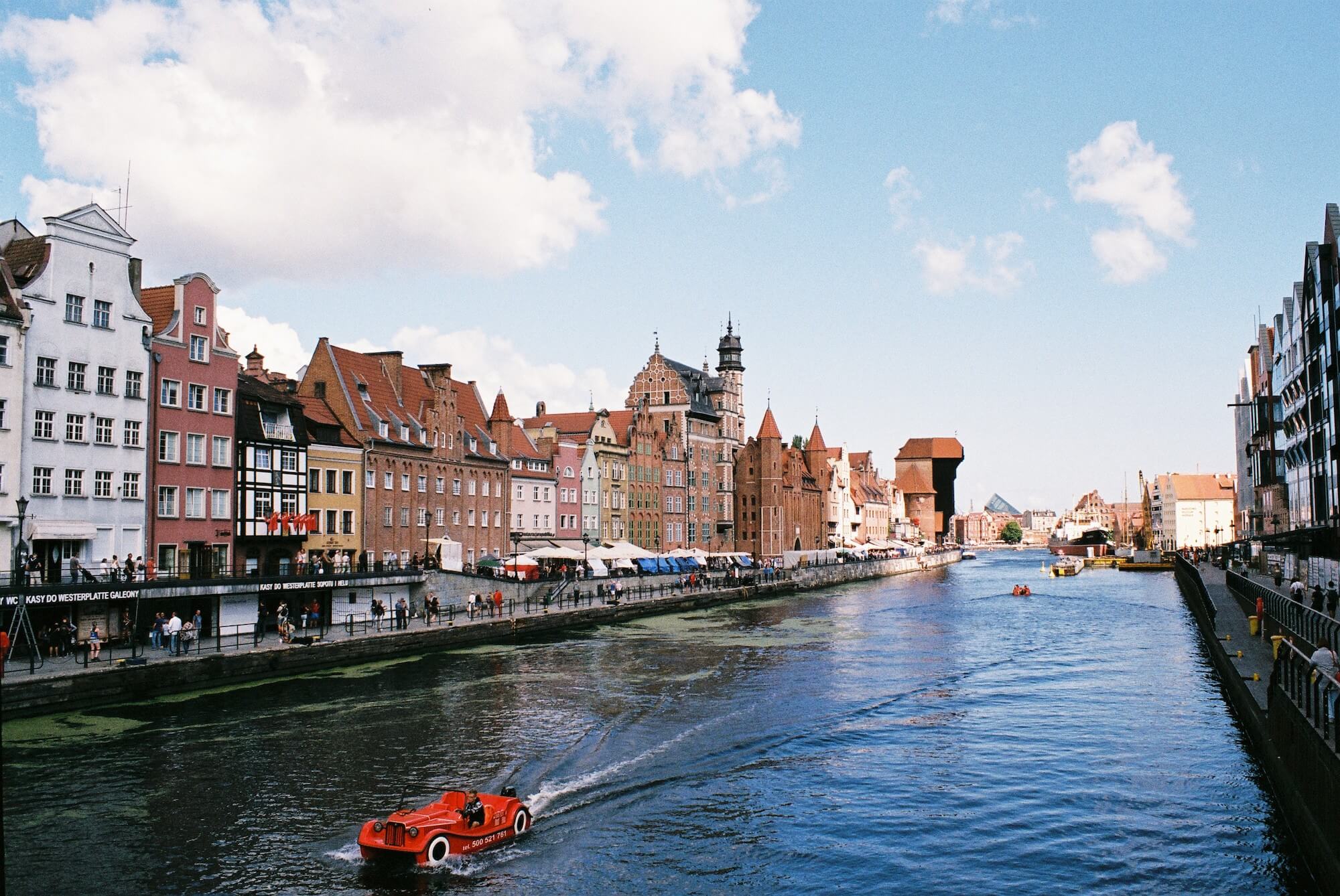 The thing I personally enjoyed was climbing the tower of St Mary’s church for some excellent views of the city. The tower features 405 steps, so be ready for quite a workout. 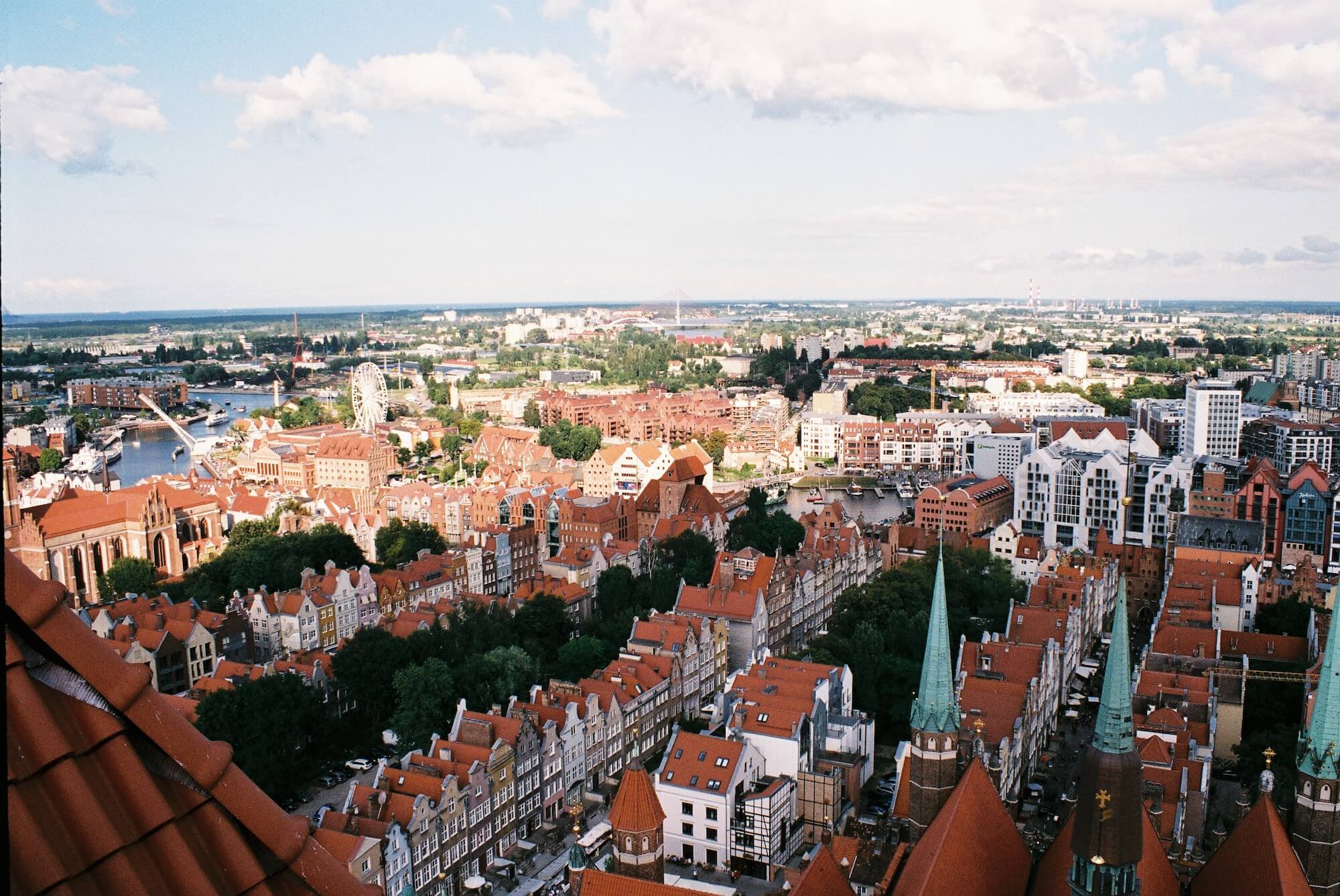 I wouldn’t be the best person to write a detailed guide about what to see in Gdansk. What I can do, though, is share my impression about the town. Which was – it’s totally worth visiting! With all its little markets, narrow medieval streets, and outdoor bars, Gdansk is a perfect getaway for a long weekend.

WWII started on September 1 when the Nazis began shelling the Polish naval port at Westerplatte, 7 km from the city center of Gdansk. The Polish garrison held out for a week before surrendering.

To commemorate the event, the hilltop memorial was erected at Westerplatte. One can also find a small museum and ruins remaining from the Nazi bombardment. 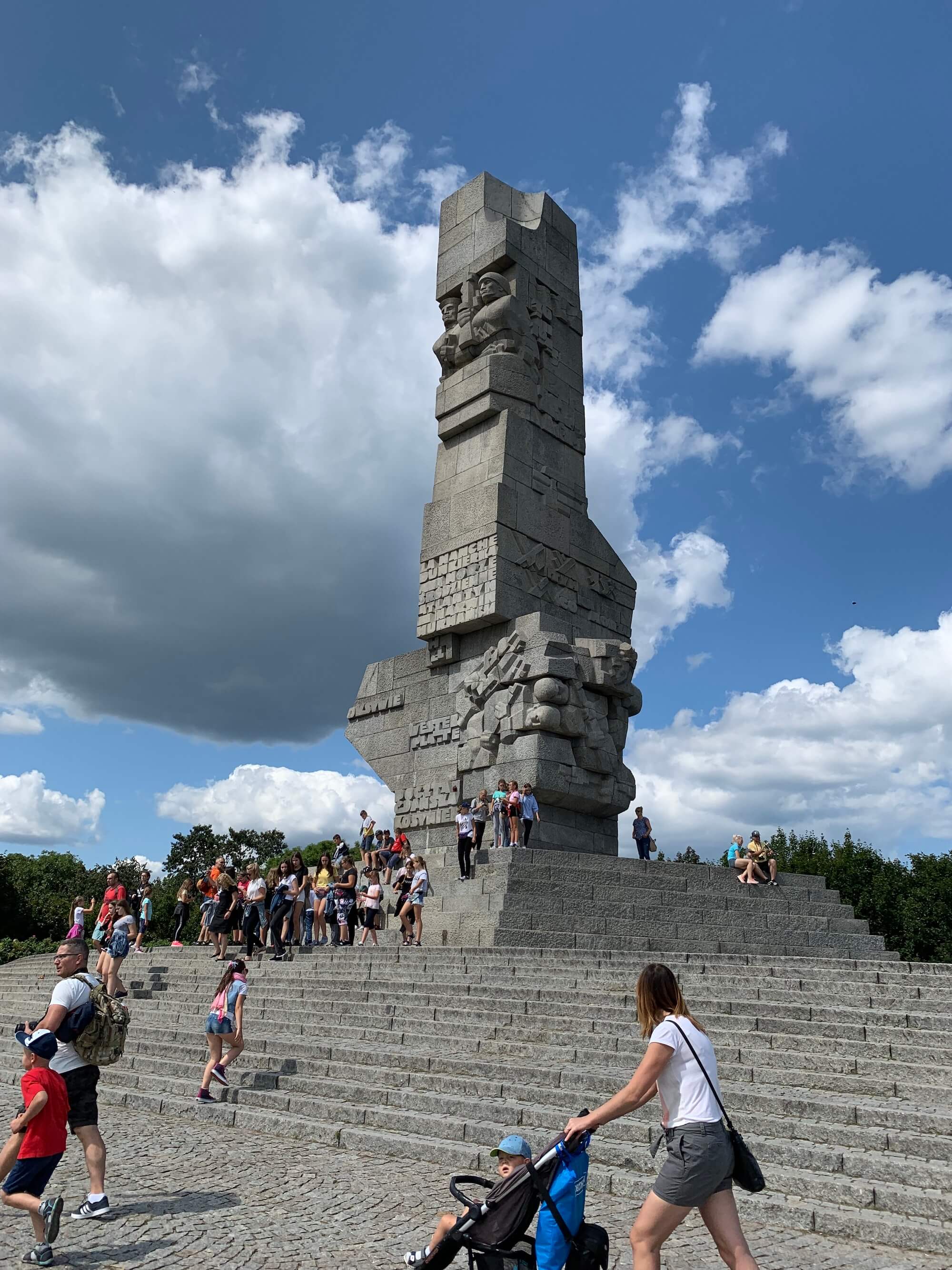 Pro tip: to see Westerplatte and other city surroundings, I highly recommend renting an electrical bike. The city has a decent bike infrastructure, which makes it super easy to go places. Also, if the weather is nice, you will definitely enjoy the ride along the seashore. 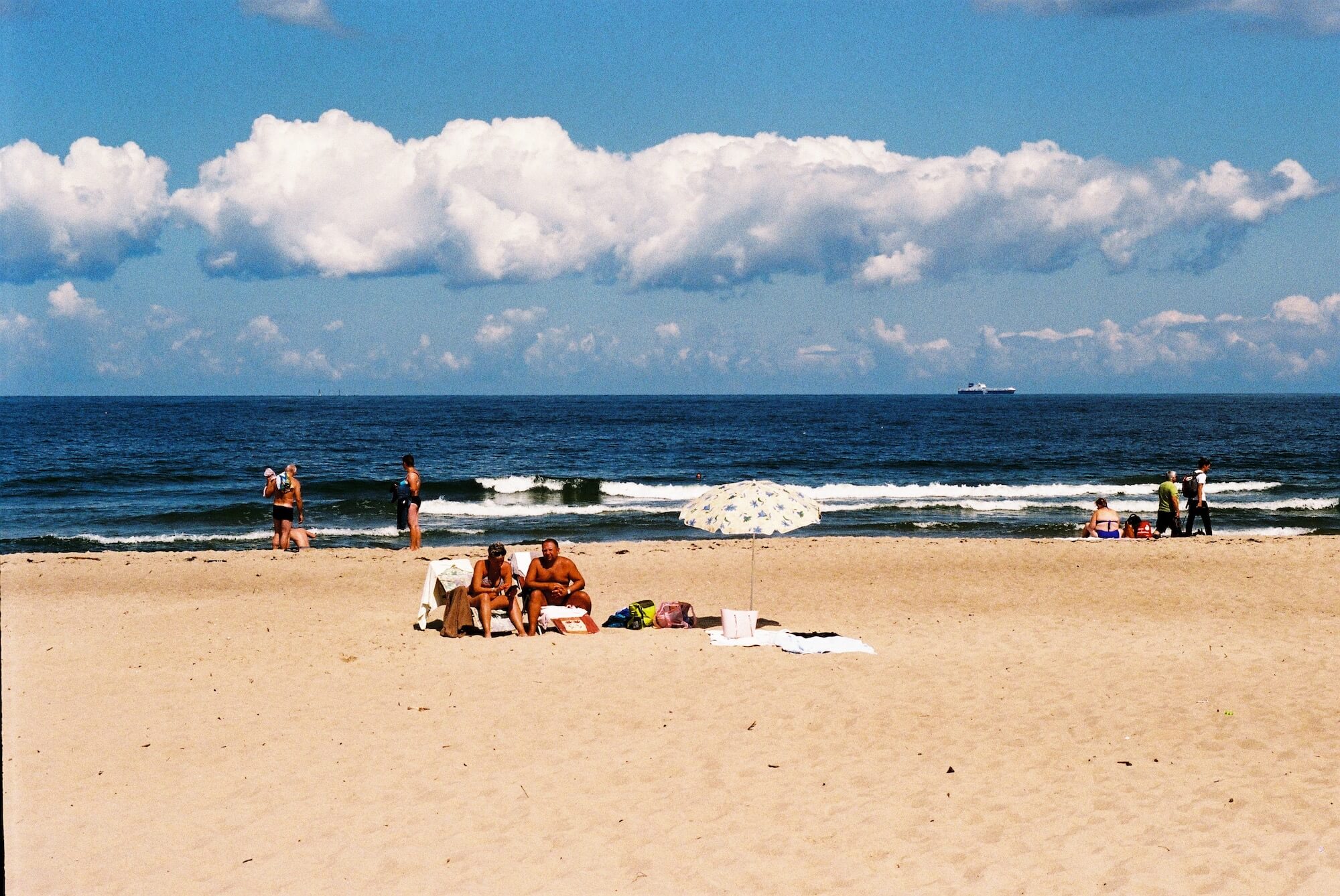 European Solidarity Center (or Europejskie Centrum Solidarności in Polish) hosts a museum and library devoted to the history of Solidarity, the Polish trade union and civil resistance movement, together with other opposition movements in Eastern Europe under the Communists. 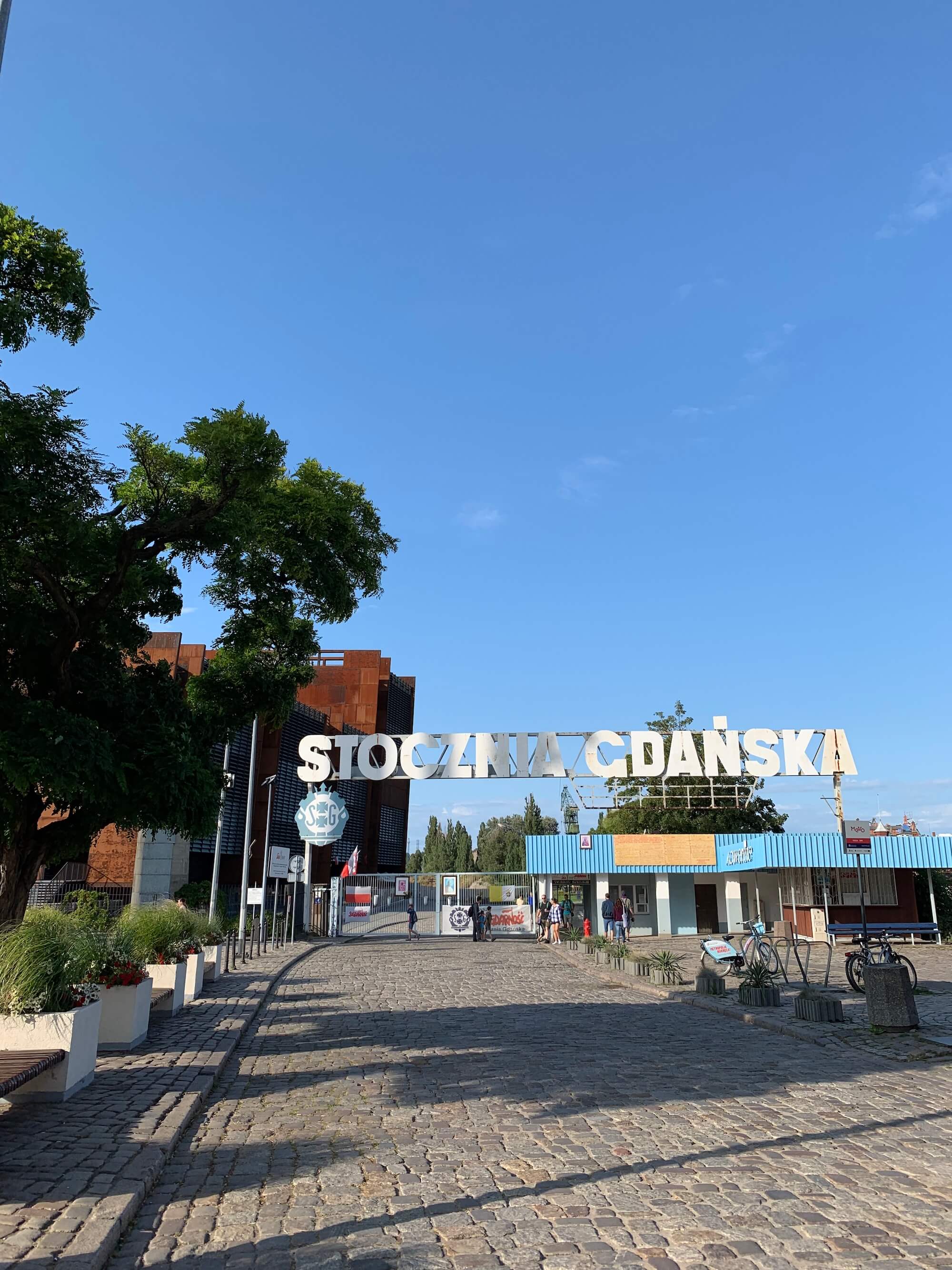 The building itself is remarkable. It resembles ships built at the Gdansk Shipyard. Inside the museum, each one of six halls is dedicated to a certain era in the Solidarity’s coming into being.

Sopot has been one of the Baltic coast’s most fashionable sea resorts since the 19th century. It does feel relaxed and easy-going. With some great nightlife and sandy beaches, it’s a great place to visit once you’re done with the sightseeing in Gdansk. 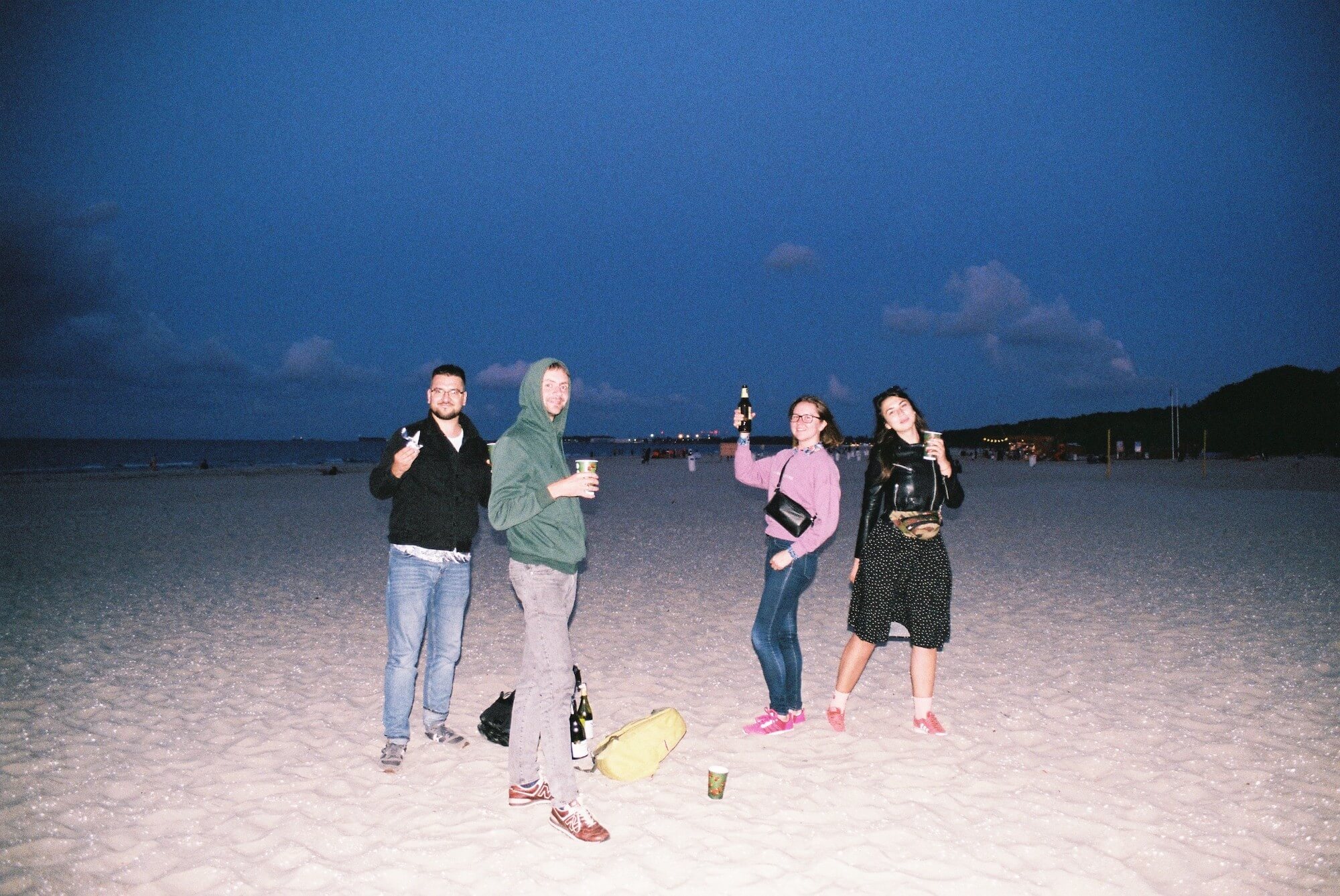 To be honest, I only briefly drove through Gdynia and visited its Marriott Hotel. The city didn’t impress me that much: it looked like it didn’t have Gdansk historic fleur, nor the party atmosphere of Sopot. But if you’re around for a longer time, it might be worth a day trip.

Is Gdansk worth visiting?

The city surprised me – in a good way. I wasn’t expecting to see a great tourist sight. When speaking of places to visit in Poland, Gdansk wouldn’t probably be the first to come to mind. 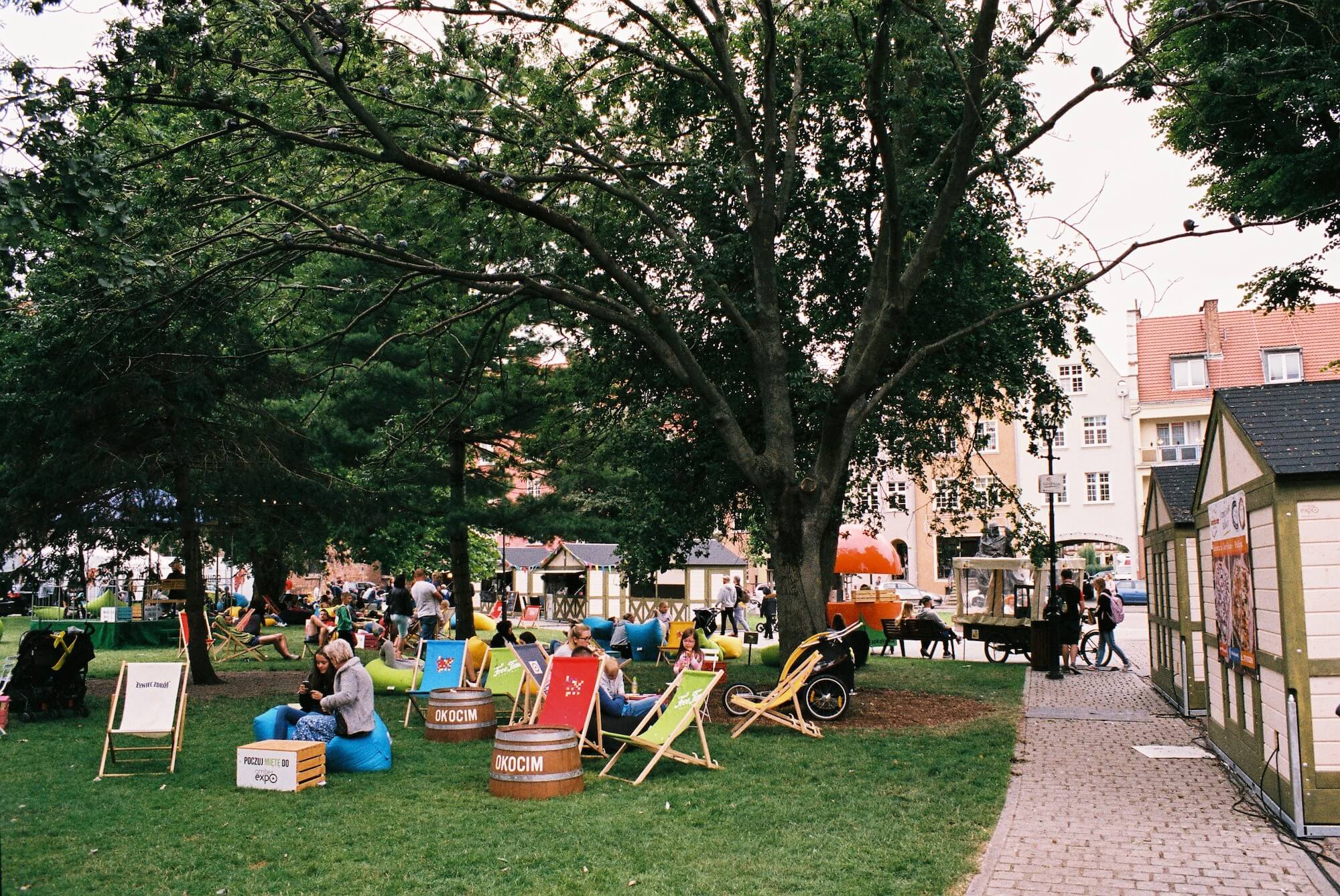 However, for me, it turned out to be a great combination of history and party life. It also holds some sweet memories of my friend’s wedding but that’s a whole different story💕 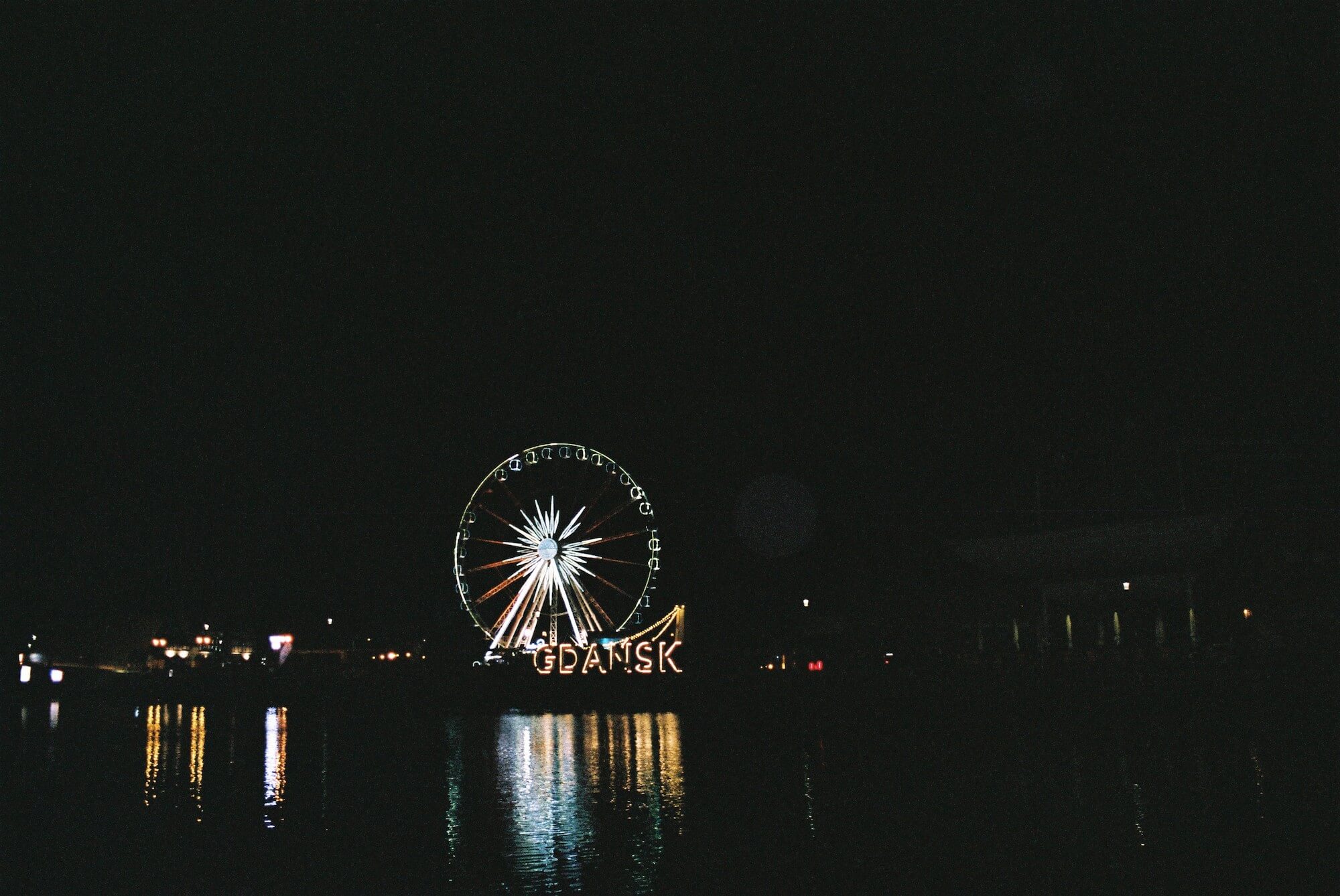